The weather is starting to cool down, so I've been craving for a warm fuzzy breakfast lately.  I decided the night before to roll out some bread for the next morning's breakfast.  I was actually super skeptical of this recipe because it didn't follow the "proper" way that I usually made bread.  I didn't have to feed my yeast and there was no kneading involved.  No knead bread? I know, it's crazy!  So crazy that I have to actually share this recipe with you because it was really good.  So good, that J called it cake. 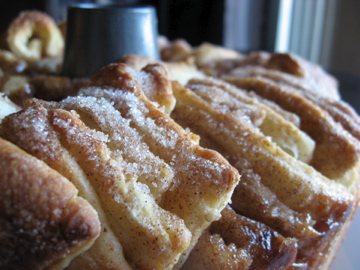 The recipe yields 2 loaves of bread, but I decided to bake it in an angel food cake pan instead.  You can also use a bundt pan instead. 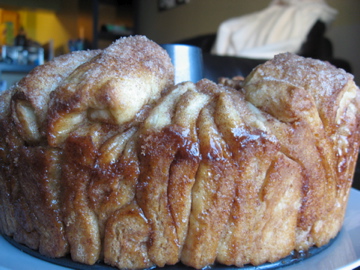 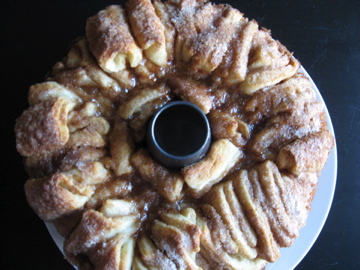 As you can tell, I modified the recipe quite a bit, so it's surprising that it still turned out very well and moist.  I also omitted nutmeg because I wasn't a fan of it in my bread). 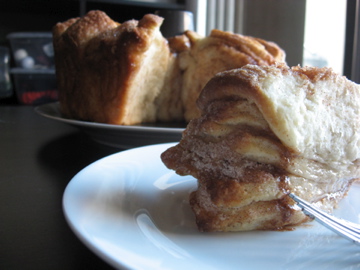 1. In a large bowl, mix together 4 cups of flour, sugar, yeast and salt.

2. Mix the melted butter, milk, water and vanilla together.

3. Pour the milk mixture into the flour mixture and mix with a spatula.  Add the eggs and stir until it is incorporated.

4. Add the rest of the flour and continue to mix with the spatula until the ingredients are well combined.  The dough will be sticky.

6. Once the dough has risen to double it's size, punch it down and let it rest for 5 minutes.

7. Mix all the ingredients for the filling together except for the melted butter.

8. Cut half of the dough ball.  Roll it out until it is approximately 12 inches by 20 inches.

10. Cut the sheet into squares.  Ideally, they should be as wide as your pan and as high as you want it to be.  Stack your squares and stand them straight up in your pan.

11. Repeat with the second half of the dough.

12. I saved a handful of filling to sprinkle on top of the dough once all the squares were put into place, for a crunchy topping.

Since I wanted mine for breakfast the next day, I let it rise on the counter loosely covered with plastic wrap for about 30 minutes and put it in the fridge.  The next mornng, I pulled it out of the fridge, and let it sit on my counter until the oven was ready.

If you want to eat it the same day, let it rise with loose plastic wrap for about 45 minutes until it is doubled in size.

Let it cool slightly before attempting to remove it from the pan.  If you choose to use an angel food cake pan too, use a cookie sheet underneath as there will be drippings.