« Back to Tasty Productions

Remember the failed x-mas dessert of 2011? I do.  Very clearly at that.  Like I've previously mentioned, the universe hates me on x-mas and everything that I make fails.  It turned out so awful that I couldn't document it with a photograph.  I basically served soupy chocolate tart.  Well, I decided I wouldn't admit defeat to the Chocolate Pretzel Tart from the Food And Wine Magazine (http://www.foodandwine.com/recipes/milk-chocolate-tart-with-pretzel-crust). 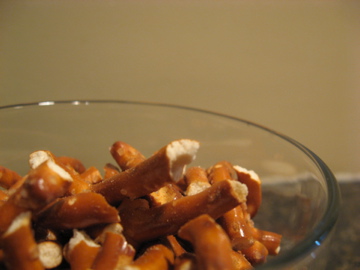 I adjusted the whipping cream to chocolate ratio and it set beautifully. 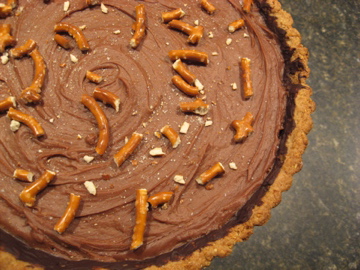 Instead of using powder sugar, I processed granular sugar with pretzels in my magic bullet. 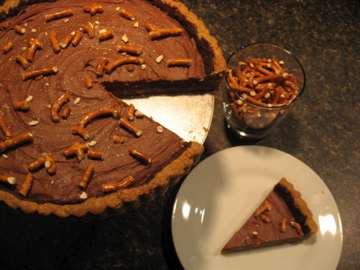 Instead of pulling out the rolling pin to roll out the crust, I pressed it into my pan as I would with a graham cracker crust. 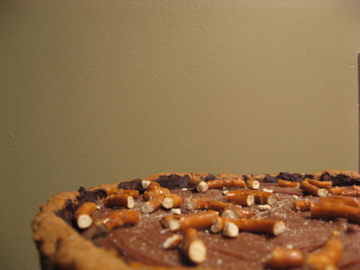 Lindt chocolate ganache with pretzel crust, topped with a sprinkle of sea salt and pretzel pieces 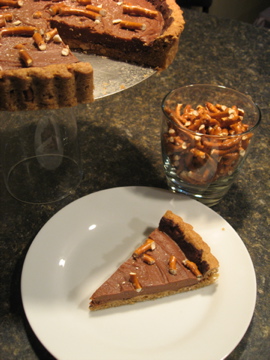 If you love salted caramel, you'll love this tart. It is the perfect balance of sweet and savoury flavours. Did I mention the chocolate of choice was Lindt? I almost went with Godiva but I think J loves Lindt more. Which would you prefer, Godiva or Lindt? Or perhaps a 3rd alternative? I went with milk chocolate as suggested by Food and Wine, but I'm pretty certain I wouldn't mind a dark chocolate version. 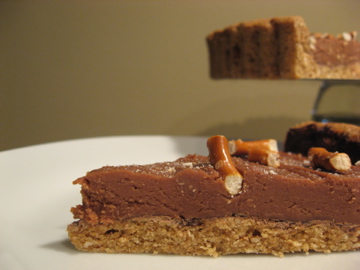 Gotta love eating your cake and having it too.

J one day asked if I could merge his two favorite desserts: pie and cheesecake.  Why not?  It would almost be the turducken equivalent of desserts.

Why this works: Both pies and cheesecakes bake at the approximate same temperature for the same amount of time.  Thus one section will not be overdone or underdone.

Each individual component was executed perfectly... my crust was flaky, cheesecake was decadent and fruit filling had the right amount of tartness. 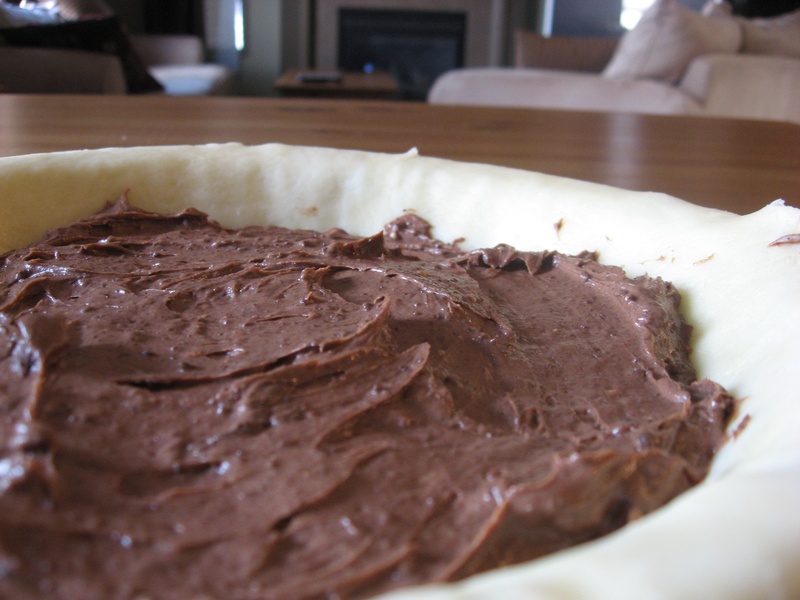 So what went wrong?

I skimped too much on the pie filling.  I made approximately a cup and half of pie filling in fear that I would over load the pie.  Reality, because the chocolate flavour was so intense, it needed more fruit filling to offset the richness. 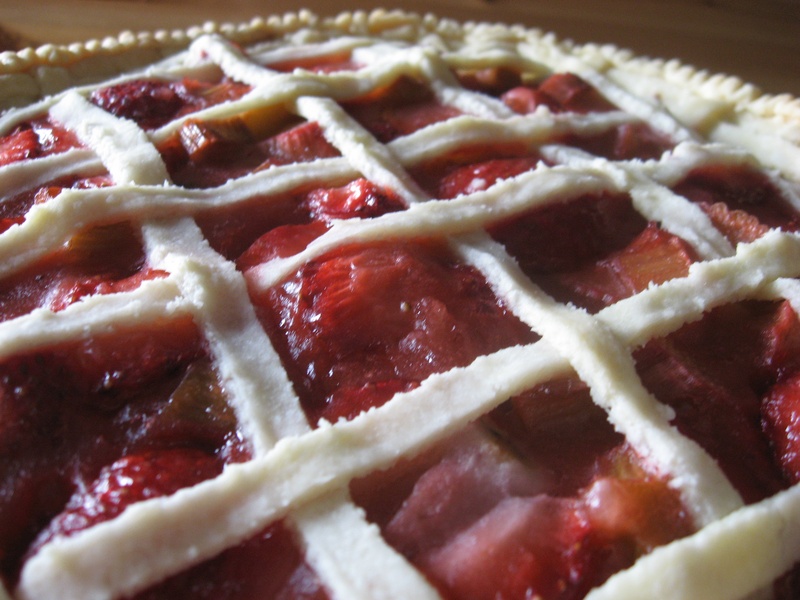 J also felt a classic vanilla cheesecake would have paired better so the cheesecake doesn't take away the shine from the fruit filling.  This ones tastes like chocolate covered strawberries, in pie form.  To each their own?

Definitely nice try but will definitely be improved on the next one. 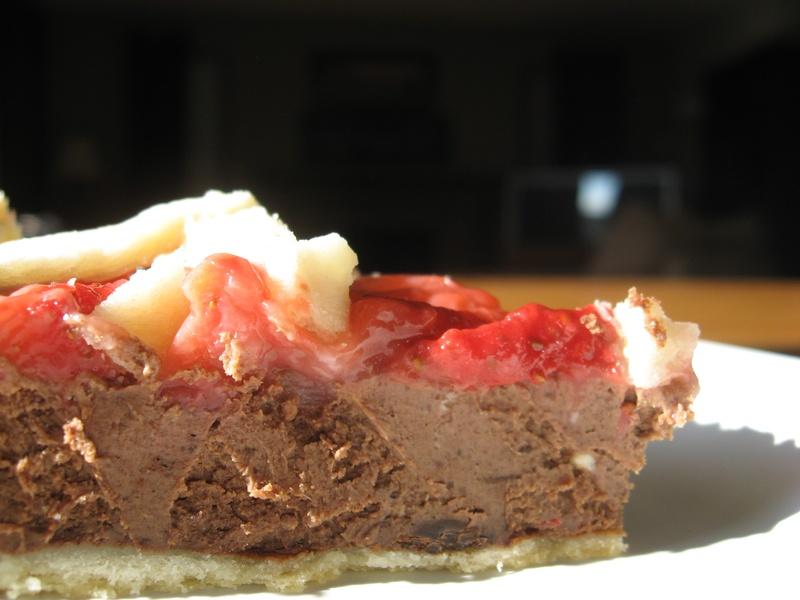 Everyone should take advantage of the summer fruits that are vastly abundant and delicious right now.  I decided to use this opportunity to make key lime pie.

Key limes are smaller than the average limes you usually spot at the market.  They range from yellow to green in colour and produce a lot of juice for their size.  Roughly 3 lbs or 20 key lime pies will supply enough juice for a 9 inch pie.

I loved the simplicity of key lime pie and the decadent taste.  With the perfect harmony of sweet and tartness, key lime pies make great desserts for the summer heat.  Key lime pie bakes like a cheesecake where a custard is baked on a graham cracker crust, and then chilled until ready to serve.

The pie is decadent so slice thinly and serve whipped cream and fresh slice of lime.

I'm interested in substituting limes with lemon to produce a custard lemon pie.  I would suspect it would be similar to lemon meringue pie with a thicker and decadent texture.

So, Yesterday I had an entry up regarding Caramel Apple Pie. However, due to my clumsyness, I accidentally deleted it while trying to play around with my CSS coding. So, this is an attempt to redo the previous entry and includes today's entry which is another Caramel Apple Pie.

I love steamed or warmed chocolate milk. It's less chalky and heavy compared to hot chocolate. I definitely recommend it to anyone whom hasn't tried it yet. Simply use your coffee maker steamer attachment or gently simmer in a pot. I also love post-Halloween candy shopping which got me into my current predicament. I am still trying to eat the $80 worth of candy from Halloween; which brings us to today (and yesterday's) recipe: Caramel Apple Pie. 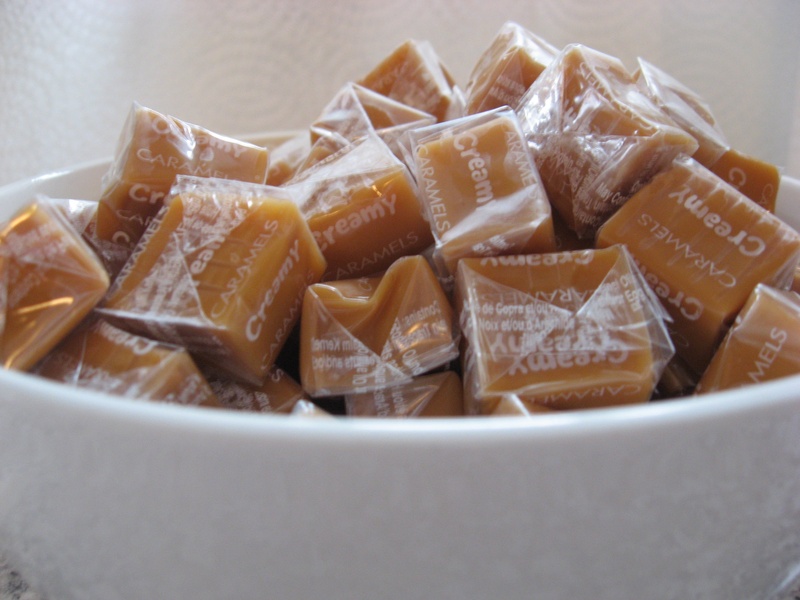 The first time I ever made pie dough several years ago was intimidating. Little did I know then, that a difficult dry dough is a good dough. If the dough is easy to bring together, then it has too much water and will leave you with a soggy and unflaky crust. 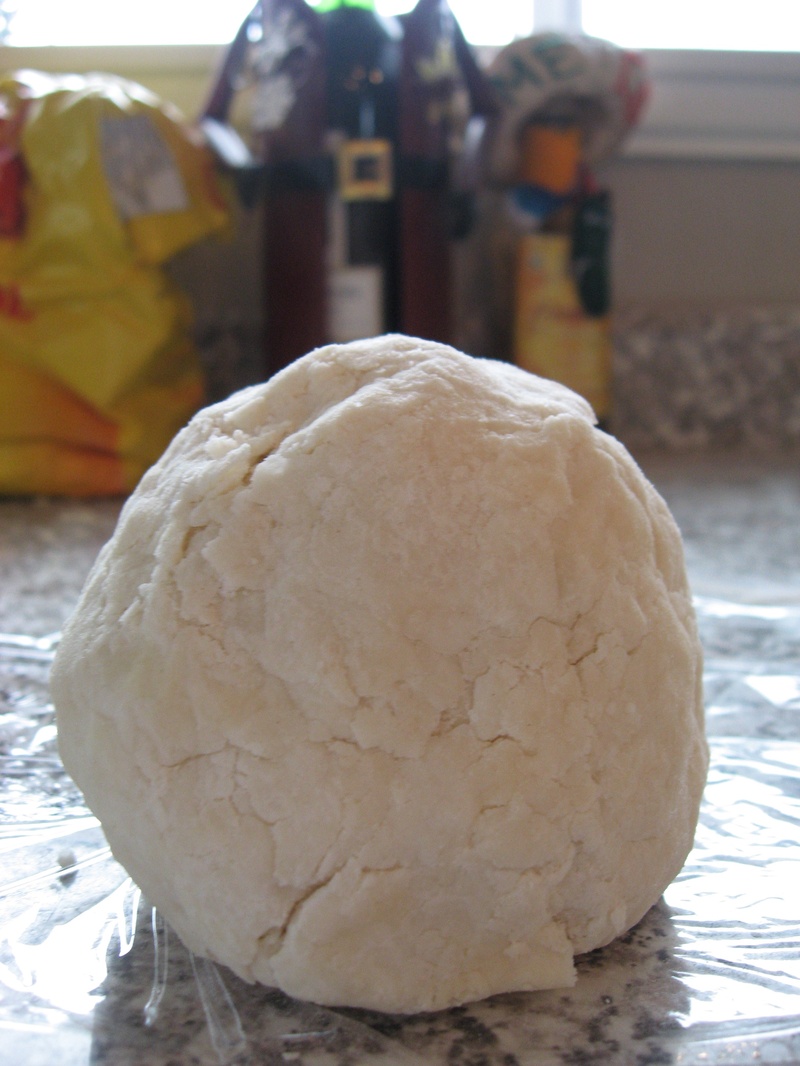 It's time to invest in an industrial rolling pin as I broke mine while attempting to roll out pasta dough by hand. Lesson learned. 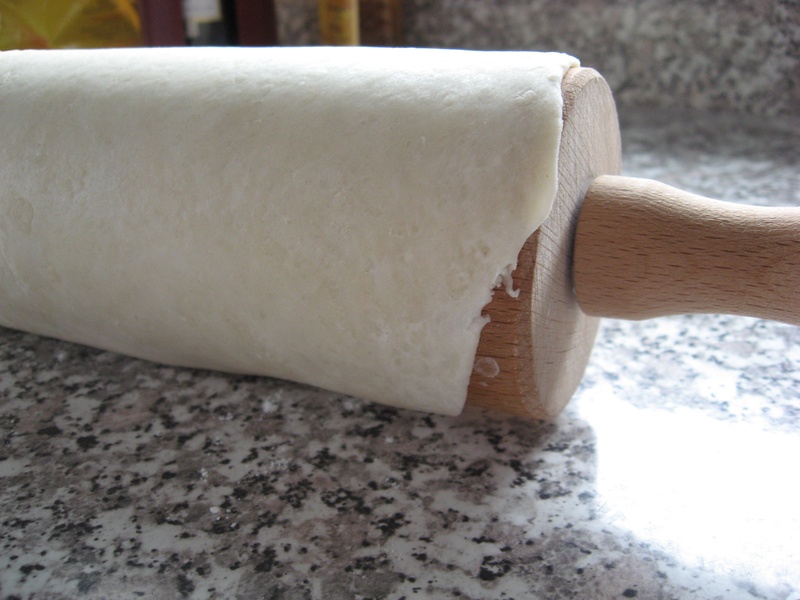 J asked about baking apples while we were grocery shopping the other day. The rule is you can use any apple you like as long as it holds its shape and flavour after baking. I like Granny Smiths because its tartness can balance any sweetness I pair it with. Golden Delicious is also a great choice if you want to avoid tart Granny Smith. However, never use Red Delicious because it will turn into mush. 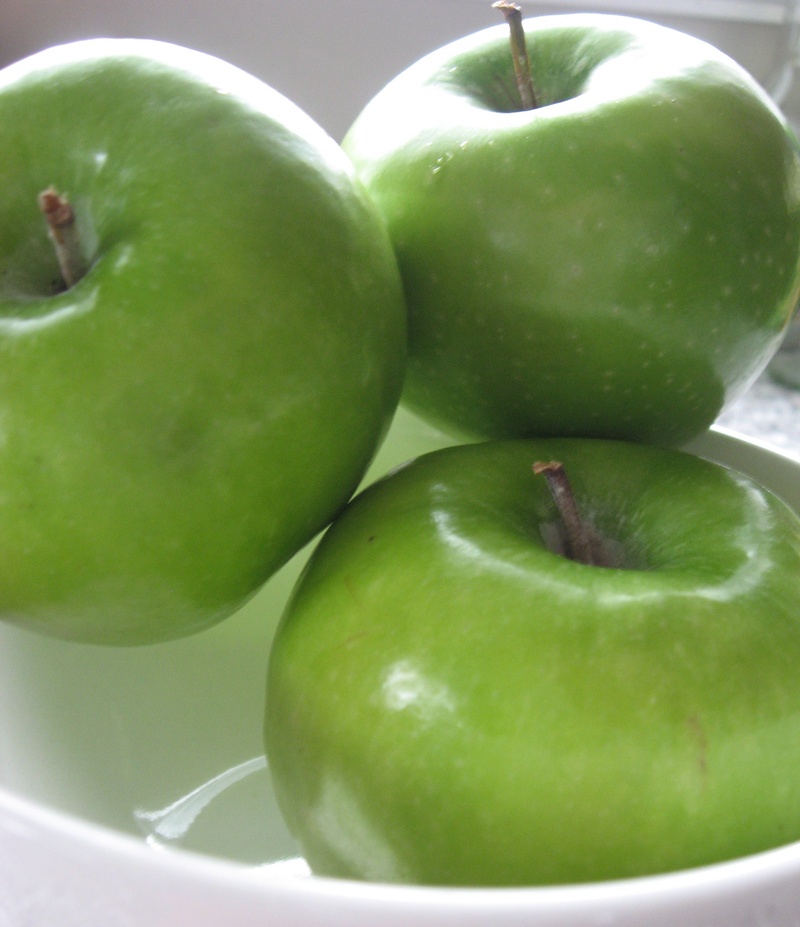 Yesterday's Caramel Apple Pie was made using my own pie crust and a new recipe for the filling. The recipe is from allrecipes.com (http://allrecipes.com/Recipe/Caramel-Apple-Pie-II/Detail.aspx?prop31=8) and I followed it to a "T" because it got great ratings. Although I generally make a lattice crust because it releases more steam, I had to make a classic crust so the caramel toffee filling wouldn't leak out. 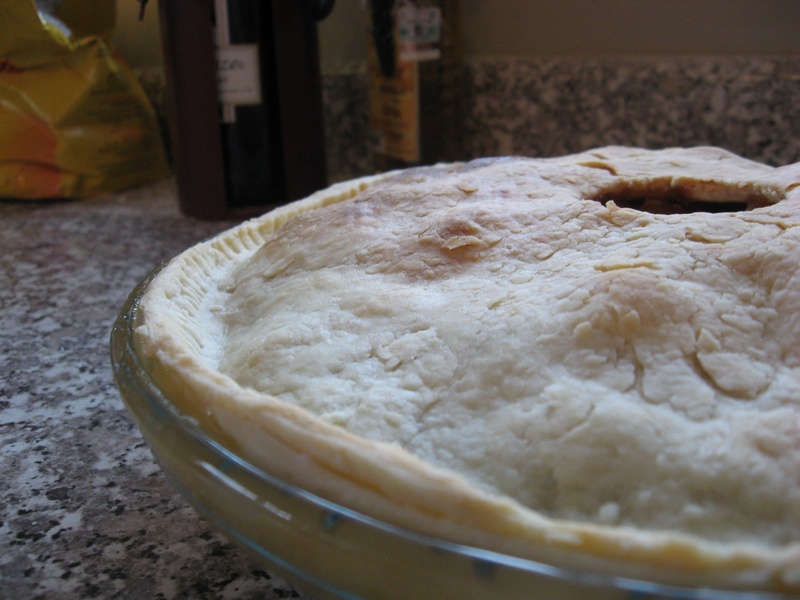 Results: First, I should mention J and I only eat our pies warm, so critiques are based on warm fillings.  This pie was a disaster! It was more like pie soup. There is no way 3 tbs of flour is going to be able to thicken 5 cups of fruit plus caramel toffee. There was a huge empty void between the top crust layer and the filling caused by the apples slowly cooking and shrinking while the crust remained in shape. I dislike voids between my crust and fruit. The caramel did not melt or distribute uniformly and there were candy chunks as you bit into the pie. I was disappointed that I wasted my pie crust on a disastrous filling. I should have trusted my instincts when I knew the recipe was off, but I chose to go along and see the results. So after J panicked as I tossed the entire pie into the garbage, I promised I'd make him another one. 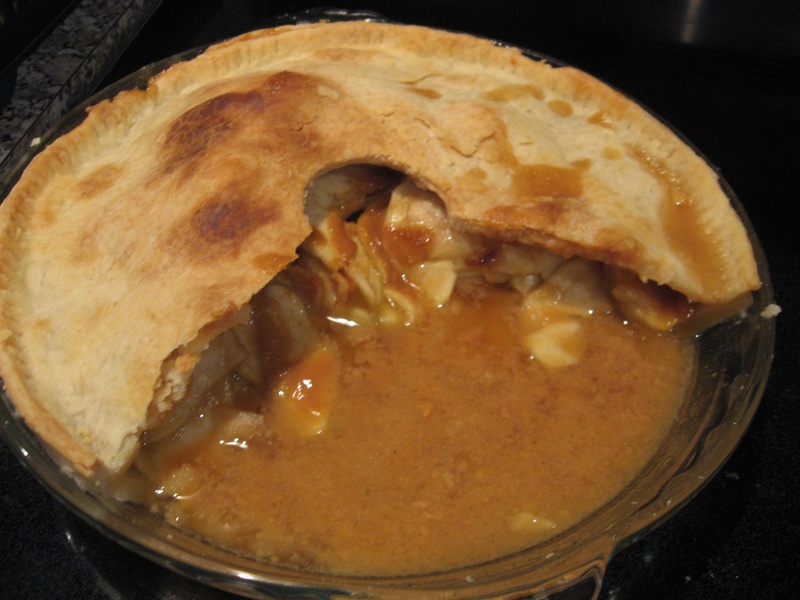 What I did differently? I made the filling the same way I make ALL of my pie fillings. I cook my fillings on the stove top with a thickener so I won't get any surprises after baking. I also mixed the caramel toffee in with the cooked apples instead of layering it like the other recipe. 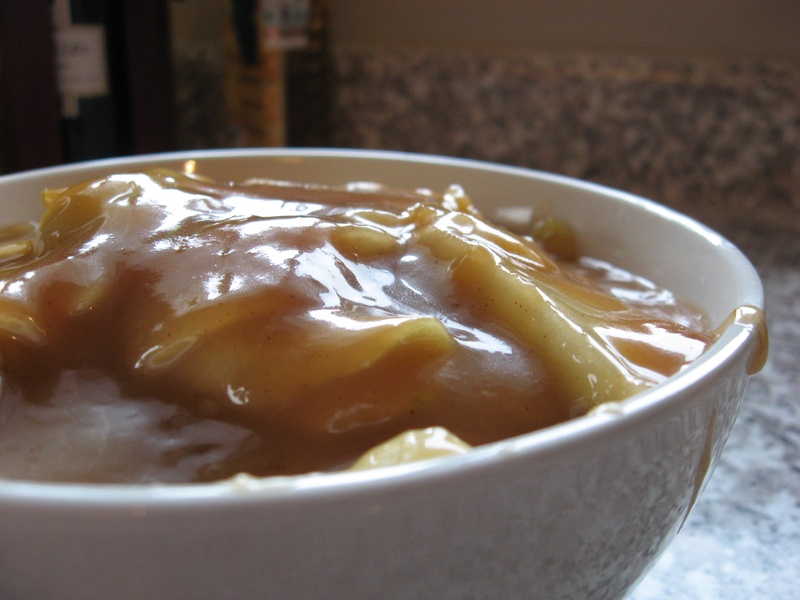 Results: I think its a no-brainer. Non-soupy pie wins hands down!!! 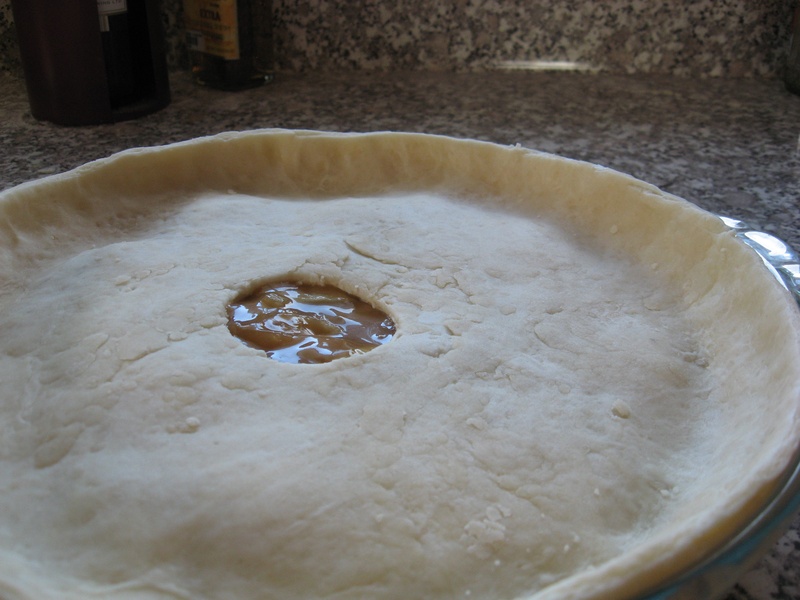 - use cold butter and icy water for crust if recipe calls for these ingredients.

- do not defrost frozen berries before using if you are using frozen over fresh.

-wrap edges in foil for half of the baking time so you don't end up with over done edges. 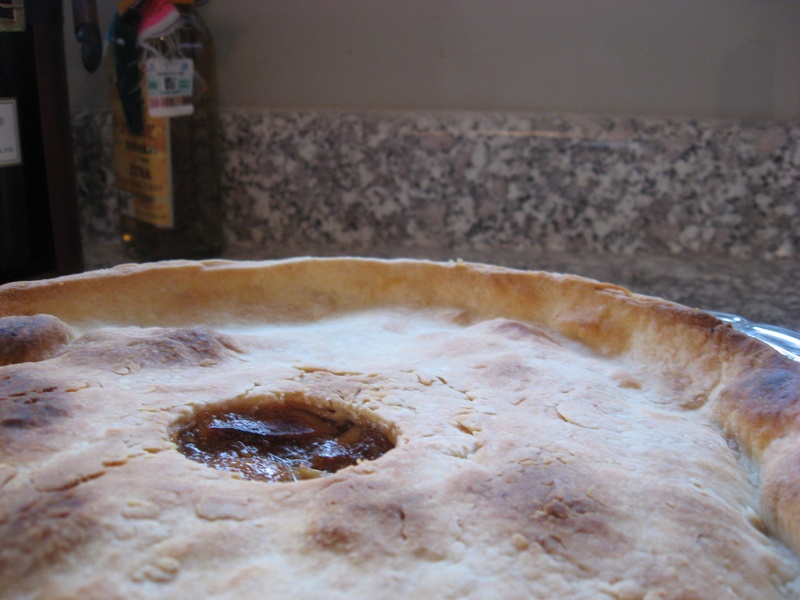